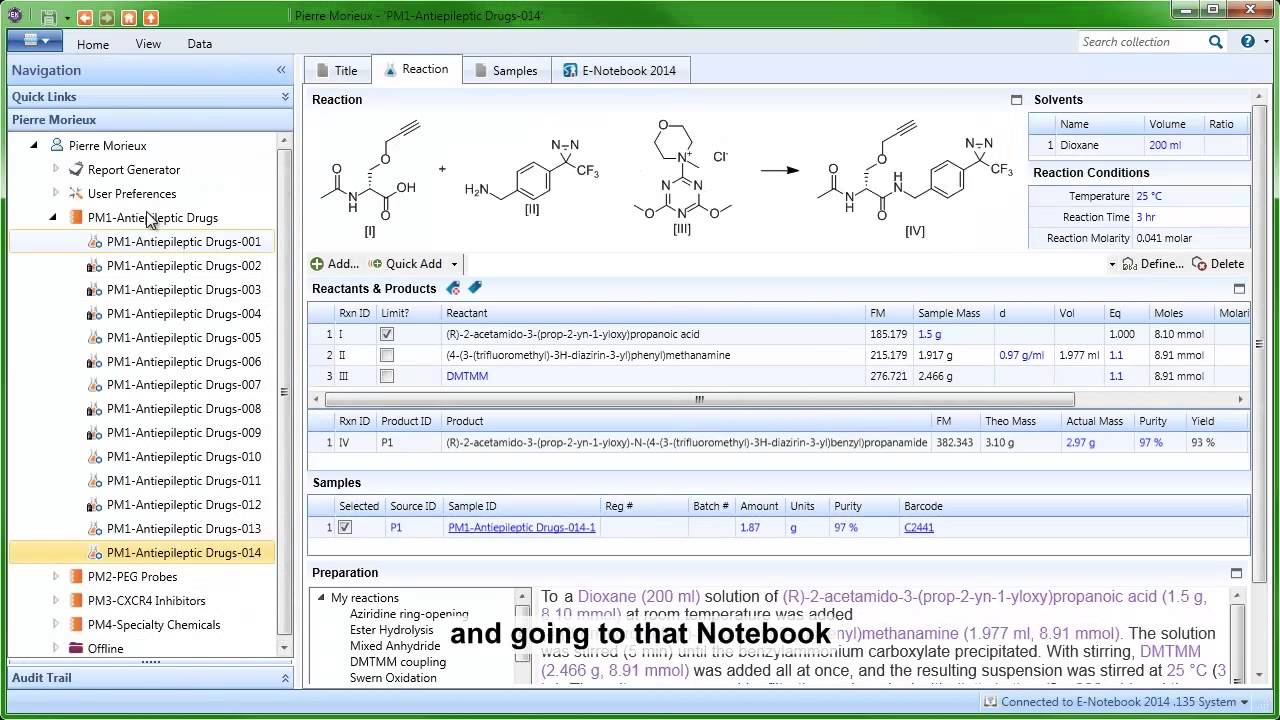 CambridgeSoft offers an electronic notebook called ENotebook. The following is a series of frequently asked questions regarding this tool.

June 4, 2012 Keeping track of all of the safety rules for reactions and reagents was an overwhelming proposal, so the chemistry safety officers at Bristol-Myers Squibb recruited informatics help to see if there was another option. The resulting electronic laboratory notebook customization earned a best practices nod by the judges in the 2012 Bio-IT World Best Practices Awards competition.

For a Bristol-Myers Squibb medicinal chemist, numerous compendia have been assembled to capture the safety parameters of thousands of chemical reactions: manufacturer safety data sheets, Bretherick’s Handbook, and corporate directives based on historic safety data. But it was up to the chemist to go through all of those sources, determine which reactions would be considered unsafe, and report those reactions to the safety officer. The expectation was that chemists would “pull” this information from each source and apply it to a planned experiment, said the Best Practices entry authors.

It was an overwhelming proposal, so a team of chemists and IT professionals collaborated to fundamentally transform the safety-IIT interface from a “pull” into a “push” process.

“The impetus here was really a deep analysis by our chemistry safety colleagues, our safety officers, who recognized that we really didn’t have a good capability in place to remember the incidents that happened in the past and prevent them in the future,” explains Ramesh Durvasula, director of informatics at BMS. “Every chemistry lab has accidents, but the key is if you can learn from the mistakes of those accidents and never let those incidents happen again, you can increase the safety.”

An IT system built to contain all of the safety information, history, and rules was the reasonable solution, and the electronic lab notebook (ELN) was the novel home for it.

“We understood what the workflow of the chemist was in the lab, and we tried to match each of the applications that the chemists use onto the steps in their chemistry processes. So from synthesis planning, reagent procurement, reagent preparation, gathering of the materials,… after we went through the experimental method, we recognized that the last system that they touched before they actually run their reaction is in fact the lab notebook,” Durvasula says.

“The information about the reaction is all stored within the lab notebook of the chemist. There, right inside the notebook, they’re saying, ‘These are the reagents I’m about to use;’ ‘Here’s the amount of each material that I’m going to use;’ ‘Here’re the conditions I’m going to run it under.’ All of that information is actually stored in the ELN. So there’s a convergence of both the information that we needed to enforce the rules, as well as the last application that is used before the experiment is actually executed.”

Durvasula and his team built a safety customization on top of the CambridgeSoft ELN that BMS chemists were already using. The customization was fairly simple, he says; building the safety content was more involved.

Now, when chemists plan and record their reactions in the ELN, the system alerts them to any safety concerns. Triggers are set for individual reagents, reagent combinations, and for all reactions exceeding scale thresholds. The ELN alerts the chemists to the potential hazard and provides a link to any relevant procedural documents. On the back end, members of the safety committee are alerted to the fact that a potentially hazardous reaction is being conducted in their facility.

Currently, the ELN safety notification system has been rolled out globally to BMS’ medicinal chemistry group, reaching about 400 chemists at three sites. The system has been in place for about a year, and although Durvasula says ROI on such a system can be hard to quantify, since implementing the system the required emails to safety officers notifying them of potentially hazardous reactions has tripled.

At a minimum, raising the awareness of potential hazards will compel a scientist to take extra precautions, said the entry authors. “Ultimately, we hope that this capability will reduce the number of accidents and injuries in our labs.”

Durvasula says BMS is looking into other groups that would benefit from such a system—such as the process chemistry group—but notes that new rules would need to be developed for other disciplines.

Outside of Bristol-Myers Squibb, the solution is gaining attention as well. “We’ve gotten interest from other companies in learning how they could share some of the rules and some of the functionalities that we’ve created,” he says. “Other pharmas and chemistry organizations have approached us and said, ‘You know that’s a very interesting capability, great idea. How can we take advantage of it and learn from it?’ So BMS is trying to understand how best to publish the capability.”