Topaz Labs Clarify – Get the Funk out of your HDR

In this Topaz Gigapixel AI Review, I’ll be testing the claims of a photo enlargement software that promises to do things to your images that were previously considered impossible. Topaz Adjust is the closest to the new Clarity plugin, but it's more of a one-size-fits-all plug-in, including many more features such as detail control and what Topaz calls 'finishing touches.

Some of you may have read the article I wrote on “Why HDRs don’t look real” In it I went on about how what’s missing in a lot of HDRs is Midtone Shadow and Midtone Contrast. Controlling these two things either in the original HDR process or later in post can really do a lot to add photorealistic look to your HDR or actually any image.

Well soon after I wrote that I received a pre-production version of Topaz Labs latest offering – Clarity. Hey, Topaz Labs…Get out of my brain! It’s like they made this product just for me, just for what I was talking about that could cure the ills of so many HDRs I find on the web. They are almost there but missing this one piece, that can be fixed in post but not as easily as with something like Topaz Labs Clarity. Plus it even goes a little further because it offers controls that aren’t in a lot of post editing software.

Let’s take a look at what Clarify looks like, what it does and how it works

Opening the image in Photoshop, I duplicated the layer and then went to Filters> Topaz Labs> Clarity

The program opens up in the now almost industry standard, presets left, preview center, controls right. The preview area has presets for all the major types of photography, Landscapes, nature, Macro, portraits, architecture, etc. You can of course make your own custom presets from your recipe…which I of course, did. Presets also have pop-up previews which are much larger than most which is very helpful in being able to see clearly.

On the control side is where it gets interesting. There are Panels for Clarity and one for Hue/ Saturation and Luminance. Each section also having controls for opacity and masking. If you aren’t used to using Layers in Photoshop, these controls may come in really handy. I prefer to put my effects on a separate layer so that I can make changes to opacity and masking later on and it’s editable. But having these controls is a great option.

The controls for Clarity is of course where you will do the most work if you choose not to use a preset or want to modify a preset which is close to the look you desire. In the panel there are sliders for: 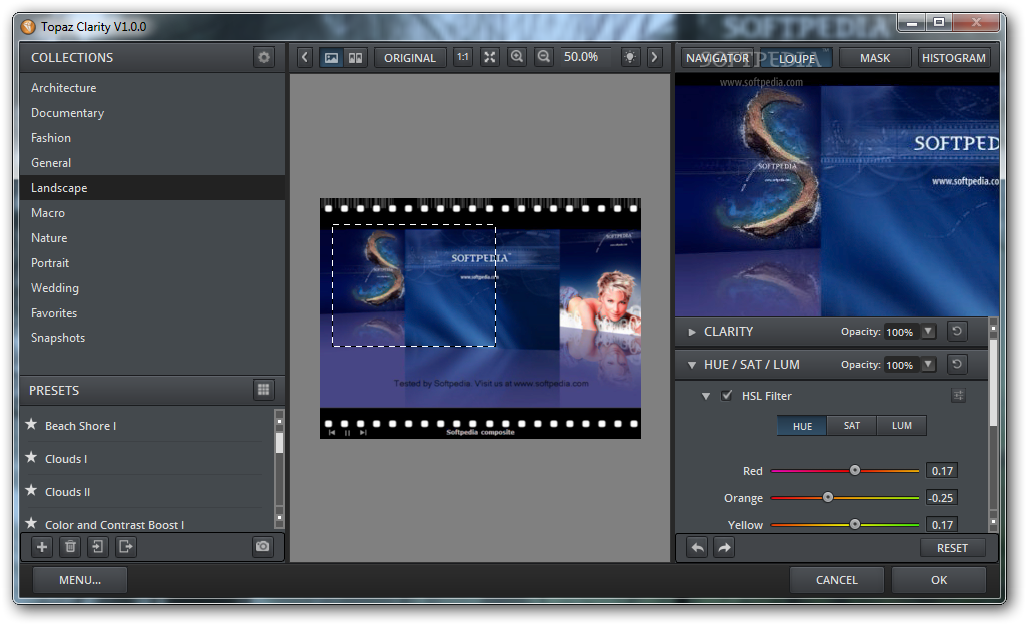 The rest of the controls are a little harder to understand so I’ll try to make some sense of it. Here is a before image that we can look at

All of the controls adjust contrast (The ratio of Dark to Light) in different areas of Contrast. Confused? Think of it this way, a White Stripe against a Black stripe would be the ultimate high contrast area. An area of mid-tone gray next to another section of just slightly darker mid-tone gray would be an area of low contrast

These sliders adjust the overall Tone levels of the different areas of the image. What I like is that there is a midtone level adjustment instead of just Blacks and Whites

As I said before both modules also have Brushes and Masks so you can apply the effect selectively within the image. You can use an edge aware brush to help “Paint within the lines’ and there also mask that work on color range. I thought the edge aware feature worked really well. You can choose brush or a Gradient map to apply the effect

I found Topaz Labs Clarity to be a very useful tool to bring that Natural Look back to HDRs that gets lost in the processing. Again as I said many HDR images loose mid-tone contrast sometimes just as part of the process or, as is the case many times, just over processing an image

Clarity also helps to remove that “Fog” that is present in all types of images (HDR or not) and gives you a cleaner, more crisp image. It does this without increasing noise or adding odd artifacts like haloing that can occur with other processors or processing.

And don’t confuse this with other Topaz Labs products because it works very differently although some looks can be achieved different ways. It’s not a Detail enhancer/ Tone Mapper like Topaz Adjust 5 is so don’t think this is a rehash of something else. In fact you could use the two together to have a lot of control over an image especially if you want to do single image “HDR” effects

I took one of my recent HDRs, a 3 Exposure +-2EV sunset at the beach. I processed the exposures in HDR Efex Pro 2 with my normal workflow except that I didn’t add any contrast in the HDR Process because I really wanted to put Topaz Clarity to the test on what is basically a very flat image, Not a lot of contrast in any zone, and especially not in the midtones that have been compressed in the HDR Process

Here are some more examples from Topaz Labs

To try or buy Topaz Labs Clarity please click the link below (Buying through this links helps The HDR Image bring you the content we do, thank you!)

Topaz Adjust is cool! In short, it is a very simple, elegant, and easy to use product that allows you to achieve HDR-like results from a single image. I use it a lot, both as a product by itself, and as a finishing touch after my normal HDR process.

If you choose to order it from the Topaz Website (immediate download for the impatient!). At checkout, use the coupon code “STUCKINCUSTOMS” to save 10%. I recommend you get the full Photoshop Bundle, because it comes with all their products and it is a tremendous deal. I use many of their products and even have a Topaz Detail review here on the site as well.

I’ve heard from a few different photography friends that I should really try this thing, and I am glad I did. It’s really a wonderful product and I could not recommend it any more. I told the guys at Topaz that I was going to give this a positive review, and I only recommend software that I actually use.

Okay, now, on with the review! As you know, my reviews are usually short and sweet and I let the results speak for themselves. I’ll get started with a few photos where I used Topaz Adjust.

So, Topaz Adjust is a Photoshop plugin that produces HDR-like results from a single image.

Once you have your image up in photoshop, selecting the plugin will open up a very friendly window that could not be any more simple. The Topaz team has created an amazing simple (and fun!) UI.

Over on the left, there are dozens of presets. Normally, I hate presets and I can never find a single one to meet my needs. However, there is such a nice variety that you can get a cool first adjustment. Something that is very smart about these previews is that they show little thumbnails. Clicking on one of them quickly shows the larger version on the right. VERY quickly. I’m used to having plugin options churn away forever just to get a preview. It’s not like that with Topaz; it’s almost immediate!

After you choose one of the presets from the left, you can then make a bunch of micro-adjustments with the sliders on the bottom. There are so many things you can do… it is simply amazing. The names are strange because the effects are strange. Much like other tools, I recommend you play with them a lot to get familiar with them. I don’t plan on talking about each feature… but for example, the “Boost” slider seems to really pump up the “HDR” effect.

Below, I have put a lot of pics from the tool so you get an idea of what I mean. Also, you can see the “before” shot of the 57 Chevy before I ran it through Topaz Adjust. I used the “Spicify” filter, which is really a bit too extreme, so I dialed down everything a bit. I believe that every image is different, and you should use Topaz differently with each image.

In the last one, you will see that I am using the built-in Noise Reduction. If you also have Topaz DeNoise, you can check that box and it will use those improved algorithms. I think both are good together, and that is why I recommended the full bundle up above with the link. Besides, the bundle comes with Topaz Simplify, which is another plugin that lets you do some painterly things to your photos.

In sum, I think it’s a wonderful product. I’m happy to use it. I’ll continue using it… and I look forward to what is coming next from these guys!

Any questions about the nature of these reviews? Visit my Ethics Statement. It’s all quite simple!