View credits, reviews, tracks and shop for the 2002 CD release of Trojan Jamaican R&B Box Set on Discogs. Shop Trojan Jamaican R&B Box by Trojan Jamaican R & B Box Set (2002-08-20). Everyday low prices and free delivery on eligible orders. Various — Trojan Jamaican R&B Box Set (3CD set). CD Trojan, 1970s. Temporarily Out Of Stock Add to Watch List. Soulful, grooving Jamaican R&B – fifty tracks worth from the deep, deep Trojan vaults, and at an unbeatable price! Includes Derrick Harriott 'I Won't Cry', Duke Reid's All Stars 'What Makes Honey', Laurel Aitken. Trojan Ska Box Set, a Various Artists Compilation. Released in 1998 on Trojan (catalog no. Genres: Jamaican Ska, Ska. TROJAN JAMAICAN HITS BOX SET (TRBCD017) - Recording a hit record is of course a major achievement for any artiste, but while breaching the national music charts in your own country is one thing, repeating that success in others is quite another. Indeed, some of the most important recordings in Jamaica's musical history still remain relatively unknown anywhere outside it's golden shores, and it.

Migrated from the wiki:

TROJAN JAMAICAN R&B BOX SET (TJETD042) - Trojan's successful series of 3-disc boxed sets has offered almost the whole gamut of Jamaican music over the last few years; the hits, the misses, the skinhead dance tunes, the deep Rasta anthems and much more. Now compiler Lawrence Cane-Honeysett has dived even deeper into the vaults and emerged, dusty but triumphant, with a 50-track selection of the music which dominated the dawn of commercial recording in the Isle of Springs; rhythm and blues.

It's nine years since this writer helped compile the groundbreaking 'Ska Boogie' CD for Sanctuary's Sequel label. The first CD collection of Ja. R&B ever issued, in retrospect it was little more than a surface-scratcher; the music did (and still does) sound good. So good, in fact, that a few of the recordings from that album nestle among the 50 tracks contained in this wee box. Many of the other tracks have never been on CD before, some are seeing their first-ever reissue 40 years after they were recorded, and a few weren't released in Britain at all.

Jamaican R&B was a music born of necessity and response to public demand. In the Fifties, giant, bass-heavy mobile discos known as sound systems became the principal medium of popular entertainment on the island. Mighty rigs like Sir Coxson's Downbeat, Duke Reid The Trojan, King Edwards The Giant and Prince Buster's Voice Of The People, and dozens of smaller 'sets' (so named because some started out playing records through a radiogram set and just grew from there) like Sir Dee's and Little Wonder blasted out music in clubs, on 'lawns' (fenced-off open spaces outside halls or bars), on the beach, on downtown street corners, in fact anywhere that there was an audience. The music that they blasted out was principally American Rhythm & Blues.

Artists like Amos Milburn, Joe Turner, Louis Jordan, Shirly & Lee, Fats Domino and Rosco Gordon were all the rage because Jamaicans could hear their tunes on powerful US Radio stations whose signal carried across the Caribbean, and because this brass-and-piano-laden style was the hip US Dance music of the time. Other styles such as the vocal group doo-wop of The Teenagers, The Moonglows, The Cliques (a particular favourite) and myriad others, the jazzy, shuffling instrumentals of bands led by Harold Land, Willis Jackson, Lee Allen and dozens more, and even the occasional Clifton Chenier zydeco swamp-up. Sound systems vied to spin the latest, hottest and rarest tunes, often scratching off the label details so that rivals wouldn't know what they were playing. (Aside: I've often wondered how, if the track details were obliterated, how they themselves knew which record was which).

By 1958, however, the supply of records that were musically satisfying and suitably danceable was drying up as tastes in the USA changed and sundry Jimmies and Bobbies began taking over the airwaves. Speaking of bobbies brings us back to Duke Reid, the burly ex-policeman who was then, as 'King of Sounds and Blues', top of the sound system heap. Determined to stay ahead of the opposition, he gathered some local musicians and cut some singles mainly for exclusive play on his sound. Unsurprisingly, said musicians exuded a homegrown version of the R&B which carried the swing at his dances.

Duke's determination to stay at the top was matched only by his rivals' determination to stop him doing so, and before the decade was out his arch-enemy Coxson Dodd was cutting his own R&B tunes, again initially for use only on his set (most Jamaicans didn't own a record player at the time anyway, so commercial issues came later). Before you could say ratchet, they were all at it, with D.E. Dunkley of Sir Dee's Simeon L. Smith of Little Wonder, Prince Buster, Lloyd Daley of Matador's, as well as a couple of notable non-sound system men, Chris Blackwell and future Prime Minister Eddie Seaga, rushing groups into what was then passed for studios.

Those 'groups', as it goes, were often drawn from the same nucleus of musicians, who would simply change their name according to which sound system man (or producer, as they were becoming known) they were working for that day. Trojan? Fine, we're Duke Reid's group. Coxson? Yeah, now we're The Blues Blasters. And so on. On dozens of those early records from Jamaican R&B's 1958 - 62 heyday, the band included permutations of sax men Rolando Alphonso, Val Bennett and Stanley 'Ribs' Notice, trumpeter's Ray Harper and Oswald 'Baba' Brooks, trombonists Emmanuel 'Rico' Rodriguez and Don Drummond, double-bassists Cluett Johnson and Lloyd Brevett, pianists Theophilus Beckford and Owen Gray, guitarists Ernest Ranglin and Dennis Sindrey (remarkably, an Australian), and drummers Arkland 'Drumbago' Parks and Lloyd Knibb.

A large number of the early records were instrumentals, but a new wave of homegrown singers, often winners of the prestigious Vere John talent show, asserted themselves. Most were more or less of an age; Owen Gray was born in 1939, Derrick Morgan in 1940, Prince Buster in 1938. There were all from the first generation who had spent their impressionable teenage years listening to R&B on the sound systems, and they, and many more artists featured in this box set, would make indelible marks on the local and later international music scenes.

Ah yes, the artists on this box set. The senior pro in the team is singer/composer/pianist/producer/you name it and he's done it Lorenzo 'Laurel' Aitken, born in Cuba in 1927. The incredibly prolific Aitken has been performing since the Forties and recording since he cut his first tracks for Stanley Motta around 1957. Numbers like 'Drinking Whiskey' and 'Low Down Dirty Girl' are pounding, invigorating good-time R&B in the mould of Amos Milburn (the two men were almost exact contemporaries), while 'Judgement Day' flaunts his Latin roots. Laurel must have sold hundreds of thousands of records in Britain on dozens of tiny labels, but he had to wait until 1981 to score a national chart hit. 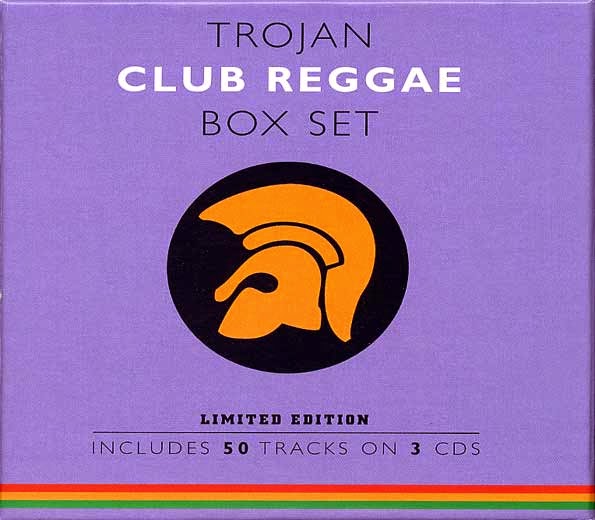 The lanky Derrick Morgan, born in Stewarton in 1940, quickly gained a following when his cool, hip and rhythmic vocals enlivened numbers like 'Oh My!' from 1960 onwards. Perhaps his finest moment came with his 1962 Jamaican Independence anthem 'Forward March', but he also capitalised on the Jamaican popularity of American boy/girl duo like Shirley & Lee and Gene & Eunice by waxing a series of discs with Patsy Todd. Their 'Oh My Love' from '62 is a perfect Shirley & Lee pastiche, while 'Let The Good Times Roll' isn't quite the S&L song of the same name, though they're certainly close relatives.

Owen Gray's voice, light but with a cutting edge, brought him fame if not fortune from the time that the 21-year-old cut his first record 'Please Let Me Go' for the R&B label. Of his five offerings here, two stand out, 'Mash It', a seriously groovy call to dance, has been neatly spliced by Trojan from it's original two-part 45 issue, so you can enjoy it straight through, spiced with splendid Val Bennett and Ernest Ranglin solos, for the first time ever. Unless that is, you own the crashingly rare Starlite LP, in which case I know where you live and I'll be coming round. The meaty rocker 'Midnight Track', one of the first Jamaican R&B sides to include electric organ, was surprisingly cut for the relatively unknown producer Charlie Moo's President label. The only previous reissue of this track that I'm aware of is also hideously rare: it's on Island's 'Blue Beat Years', allegedly pressed in a run of just 300 copies in Germany some 20 years ago

Do you remember, when you were growing up, that there was always one kid on your block who was so hip that it hurt, who whispered the names of penumbras artists in reverential tones and who owned records on labels that none of his friends had ever heard of? Come to think of it, if you've had the taste to buy this boxed set, maybe that kid was you. In terms of this collection, it has to be Derrick Harriott. By far the most American-sounding artist on display here, he must have immersed himself in the best of American music, majoring in the 'doowop' vocal groups, to have developed his confident vocal technique and his grasp of intricate group harmonies. Later he'd reach into the grab-bag of US songs by such serious soul names as The Larks, Mel & Tim and Don Covay, but early in his career he wrote his own material, recording them either solo or with his group The Jiving Juniors. 'I Wanna Love', which kicks of this collection, is a perfect example of the J.J.'s scintillating uptempo doowoppers' sound. One can imagine the lads' onstage dance routines on tracks like this one and 'My Heart's Desire'. His solo effort 'I Won't Cry' drops the tempo a little, lies back and stretches itself, and suddenly we're in relaxed New Orleans mode, and very convincingly too. There was a New Orleans hit with the same title, but it's a different song.

The best of the rest include four of the rockinest sides by soulful harmony duo The Blues Busters, of which only 'Early One Morning' and 'Little Vilma' saw UK issue as a fabulous double-header of a single; the piping tones of 14-year-old Jimmy Cliff with 'Dearest Beverly', the record which launched a long and distinguished career; early hit maker Theo Beckford, who was brutally murdered in Kingston last year, with a 'Flip Flop And Fly' variant; a forgotten man of Jamaican music, Roy Panton, again employing patsy Todd as his singing partner; and, to prove that it wasn't boogie and shuffle all the way, Keith Stewart and Enid Cumberland's sentimental ballad 'Worried Over You', one of the best-selling Jamaican records of all time.

The backing bands, whatever name they may be using on a particular session, rarely fail to bring the beat to life, flavouring the sound with accomplished, jazz-rooted solos. Check out the number of times that the hornsmen, in best bebop tradition, throw in quotations from other tunes: I spotted snatches from 'Yankee Doodle Dandy' and, I think 'Lieutenant Kije' inter alia. Trombonist Rico Rodriguez is heavily featured; having established his reputation during this first bloom of Jamaican recorded music, he moved to England in 1962 and is still active, currently as a member of Jools Holland's Rhythm & Blues Orchestra. Rico's styles tends towards the back street and battered, but check out the rare 'Continental Shuffle' which finds him at his most stylish and fluent.

By 1962, R&B was on the wane in Jamaica. A few producers, notably the conservative Duke Reid, were still making records in the style, but the nation demanded a new sound to accompany the new era of independence, and Ska, which we hear developing in some of these 50 tracks, carried the swing for the next four years. Brief, exciting, experimental, often glorious - that's the era of Jamaican R&B, and this is the finest album of this seminal music yet compiled.